Amazon has officially confirmed that it has released a new update for its Kindle app for Android devices. Although it doesn’t add a lot of new features, it offers interesting improvements that most users of this popular app will like. 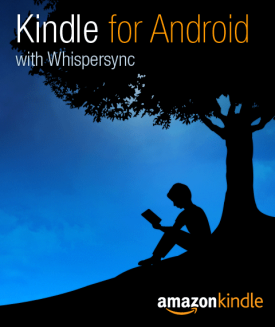 The changes and improvements coming along with the new update have been announced by the company on the official Google app store, the Google Play and discussed as follows:

The improvements implemented on Amazon Kindle for Android include:

The faster cover loading does not appear to be a lie – the app seems noticeably faster now. The auto-brightness control is hugely appreciated as well. No longer will you have to change the system setting when you want to mess with the in-app brightness. The table of contents is now available in the slide-out navigation bar, which makes it much faster to hop to different chapters. Overall, it’s a great update for the more bookish among you.

A Kindle App for Android Review about the new update:

These are all welcome changes, but they’re also so little and so late. It’s astounding to me that Amazon, the biggest entity on Earth dedicated to books, still can’t put together a reading app which is not ‘just decent’. You know, at least one with smooth page turning! We *finally* have the table of contents in a dedicated list menu (which iBooks and others had for years, for God’s sake); but in a very un-intuitive way, you can’t activate the hamburger menu with an edge-swipe. No. You have to first tap on the page to bring up the navigation, then tap on the effin button on the top-left to get to it. And when you do get to it, the fonts are so big and the drawer is so narrow that you can only read the first two or three words of each section’s title! Even the title of the book itself gets truncated. Read more at: http://www.androidpolice.com

If you are getting  started:

Kindle for Android it is an e-book reader that allows you to download and read a lot of Kindle books, both free and paid. You can read more than 750,000* Kindle books on your Android phone including thousands of free books. No Kindle device required. It automatically synchronizes your last page read between devices with Amazon Whispersync. If you are a non-US customer, book availability may vary.

Kindle App for Android not Working?

The strangest thing about the latest update by Amazon is that almost none of the improvements works correctly for many user. Some Kindle app for android problems are: most people are unable to find new embedded fonts, have to adjust brightness every time, etc. Maybe, some Kindle devices has not been updated properly or the update itself is not stable.

Let’s wait to see if they fix the problems and the update is really a full stable update. Otherwise it will be a big disappointment for the users.

Are you successful at updating your Amazon Kindle app for Android? Help us with your comments…